Here's a shot of Jack Prince from Carson's pre-Tonight Show variety program broadcast Thursday nights, 10-10:30 on CBS in 1955-56 titled, 'The Johnny Carson Show' . Prince had a reoccurring role on the show as an old shipmate of Johnny's who would happen to be in the audience, and would crash the stage, interrupting Johnny's monologue with old navy stories. He also sings in some episodes. 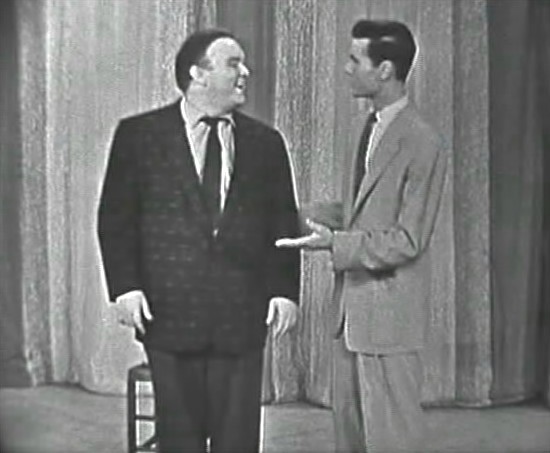 BTW, this program was on a DVD package titled, 'Classic Television Legends - 300 Episodes (2009,)' that I purchased at Amazon for $24, and what a bargain it is let-me-tell-you. 300 episodes of a variety of shows dating from TV's infancy in 1949 through the 60's. If you find the first 10 years of television history as interesting as I do, then I highly recommended this package. Also has many of the public domain TAGS episodes. Check the bottom of the Amazon link below for an episode list. Worth the price alone for the 13 early Carson shows. An education in the early days of television and worth twice the price.