Mayberry Man movie Kickstarter has begun this here day and I NEED your help to get to be in the movie! 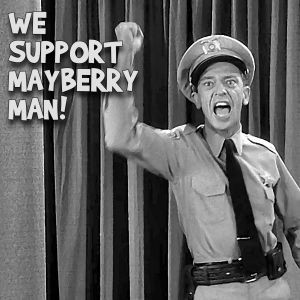 I will be in the movie, if it gets made. That's right, me...you're friendly Floyd tribute artist. In the Mayberry Man movie I will be playing a character named "Allan", a Floyd the Barber tribute artist, so I think I can pull off the role but we need YOUR help to get the movie funded/made so you can see how great my acting skills are....or how bad. :)

It's time to donate to the cause, if you plan to, because getting off to a fast start will help a LOT by triggering Kickstarter's algorithm to help spread the word. It doesn't matter the donation amount ($1, $5, $20, etc). They're trying to get a large number of folks to donate right off the bat so your contribution will help no matter how small.

If you're interested, please click below and help make the movie happen. You can also get rewards for yourself based on your donation level so I hope you'll help out.

I know this sounds like a advertisement but I'm just hoping they can raise enough to make the movie because we can NEVER have too much Mayberry in this world.