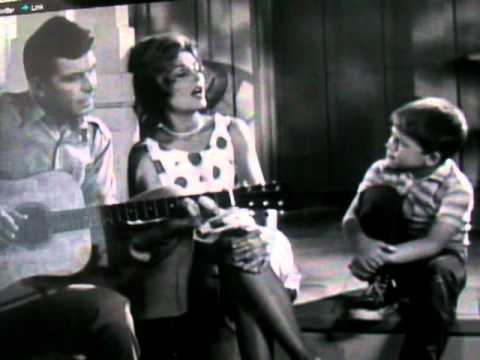 My husband and I both think that Andy should have ended up with Peggy. She was so pretty and vibrant, with so much spark and personality. Besides, she could sing and harmonize with Andy, and was a great cook, to boot! She could definitely make more than TV dinners, and I betcha she could even make some leg o' lamb- Andy's favorite dish!

Of course, we never do hear what finally broke up their romance. I was thinking of her four episodes, though, and each time, Andy made some kind of relationship blunder, or she ended up with a bad deal somehow....

Andy gave her the brush off when he listened to Barney to nip it in the bud because her father was rich.

Andy listened to Floyd and worried she was out to marry him when Aunt Bee asked her to look in on them while she was away.

Andy stormed off when she got unexpected company (wouldn't you just know his name was Don?)

Opie did his naughtiest deed by being deceitful because he was jealous of her spending time with Pa, nearly breaking them up then.

Poor Peggy...I didn't realize how difficult she had it until I started thinking on it. Andy "shouldn't not" have let her get away, but that's just my two cents. ;)

What are some of your thoughts on the matter? Do you think he should have married Peggy?